I’m Susan Horowitz a.k.a. DrSue, and I’m a great admirer of Stephen Sondheim’s work. When I was invited to perform “Send in the Clowns” in a Talent Showcase, I gladly accepted. However, we are currently in a pandemic, and group singing is known to be a high-risk activity. When the producer assigned a group song, I decided to cancel my live participation.

I still love Sondheim’s songs, so I’d like like to share my research, my thoughts, and my funny parody “Send Me a Brownie” (Scroll down for song video and lyrics.)

“Send in the Clowns” by Stephen Sondheim

“Send in the Clowns” is beautiful and touching. The song offers the performer and audience a poignant, dramatic moment of irony, rueful sadness, dignity, and at last, hope.

Popularity of “Send in the Clowns” by Stephen Sondheim

“Send in the Clowns” is one of the few songs from his theatre works that also achieved popular acclaim as an independent song. Some of the famous singers who recorded their own versions include: Frank Sinatra, Bernadette Peters, Judy Collins, Barbra Streisand, Bobby Short, and Sarah Vaughan. It also has become a beloved standard in concerts, piano bars (especially those that feature show tunes), and cabaret shows.

What is the secret of the success of “Send In the Clowns”? There are a few reasons: the sentiment (the heartbreaking disappointment of losing romantic love) is universal. The singer is relatable and appealing – in and out of the the story of A Little Night Music.

The language takes us into the elegant world of educated nineteenth century society. We may not use phrases like “Isn’t it rich?” but we understand them. We also enjoy the theatrical references, which are natural to the character, who is an actress. Sondheim’s rhymes are perfect (as always) but don’t distract with cleverness.

On a practical level, “Send In the Clowns” (compared to other Sondheim songs), is relatively easy to sing and can be performed by many popular singers. The melody has a limited vocal range, and it can stay well within the singer’s comfortable chest voice.

The words are easy to pronounce, without the tongue-twisting, breathless patter of some other Sondheim songs, for example, “I’m Not Getting Married Today” from Sondheim’s current Broadway show Company. http://www.companymusical.com

Sondheim composed “Send In the Clowns” for the character “Desiree Armfeldt” in A Little Night Music. The role was originated by actress-singer Glynis Johns, who had a limited vocal range but was an excellent actress. It can be performed by many singers who can act a song without Broadway musical training or vocal chops.

The lyric for “Send In the Clowns” is in fact, a tremendous platform for an acting driven song performance. The lyric (which you can scroll down to read) is sung by the character “Desiree Armfeldt”. Desiree is a touring actress, who had previously rejected a marriage proposal from the lawyer Fredrik. But she has now returned to his hometown and realizes that she wants to commit to their future together. Fredrik, however, is newly married to a much younger bride, who dotes on him (though she refuses to have sex with him).

After Desiree and Fredrik consummate their own reunion in her bed, Fredrik tells Desiree that he is infatuated with his childlike wife and unavailable. Desiree realizes that her dream of commitment with Fredrik is over. She looks at her own theatrical career and love life with rueful irony as she struggles to let him go and maintain her own dignity.

The phrase “Send in the Clowns” refers to the moment in a play where everything is falling apart and somebody makes jokes to divert the audiences. The “clowns” are also the two former lovers, especially Desiree, who feels like a fool.

Clowns are one aspect of comedy, another is parody. Hope you enjoy my parody of “Send in the Clowns” I call it: “Send Me a Brownie” (Scroll Down for Parody and Original Lyric.)

As you can see, I love to perform and write about comedy! Here’s a link to my book “Queens of Comedy” based on my interviews with legendary female comedians!

In my previous appearance Seth Bisen-Hersh Talent Showcase at Don’t Tell Mama, I sang songs from my original show Switch the Musical. Hope you enjoy!

Here’s the video of my singing “Switch the Musical” songs!

“Send in the Clowns” Lyric by Stephen Sondheim

Dr. Sue and Troubador Farnham invite you to a musical journey back to the time of William Shakespeare, with songs from Shakespeare’s plays and poetry and the flowering of the English Renaissance. Join us in an enchanted forest (Central Park, NYC). Before there were rock stars and electric guitars, there were minstrels and lutes! Our DrSue New Word is… “Lute”!

Dr. Sue, Singer-Songwriter, Inspiring Educator, and Tashawn X, Teen Basketball Star/Leader Motivate You to Take a Chance! Tashawn’s basketball symbolizes opportunities in life! Will Tashawn’s basketball fly through the air and score a far 3-point shot? Will you dare to take a chance and go for your dream? Unrehearsed, authentic video is shot @Borough of Manhattan Community College/City University of New York (BMCC/CUNY) by Dr. Sue, Ph.D. Professor, Singer-Songwriter, Host-Interviewer of DrSue New Word Inspiring One-Minute Videos – for All Media!

Dr. Sue and her Teddly Bear Puppet invite you to a Virtual Tour of the American Museum of Natural History (AMNH) in New York City! https://www.amnh.org/

Enjoy a Special Exhibit “The Nature of Color” – a scientific, artistic, cultural view of hue – and meet bears in New York City!

What are colors? Which ones can we see? Can some animals see what we cannot? Are there “colors” (electromagnetic waves) that we can’t see, but which powerfully affect our lives?

How do we “see” color – how does a “colored” object, light, or reflection send a message to our eyes and brain? Do colors create feelings, and do colors mean different things in different cultures?

Why do some animals have different colors at different times? How can color make an animal a mating magnet or a “master of disguise”?

People come in different colors too, but how different are we – under the skin?

If you’re curious about color you’ll love this special exhibit “The Nature of Color” at the American Museum of Natural History (AMNH). There’s plenty more to see at AMNH. Look out for skeletons, fossils….and bears!

Happy Passover, Easter, Spring… and whatever you celebrate!

I hope this photograph makes you think of all we have in common:

We all need something to believe in.

We all need just laws that serve the greater good.

We all need sunshine  (above the 10 commandments in the photo)

We all need generosity – open arms and open heart.

We all need to believe in Spring – symbolized by the green color of my dress and the flowers in my shawl.

We all need to feel part of a community.

When we cannot be physically close, when it’s not wise to physically touch, we can still feel close in many ways.

We can talk on the phone, we can connect on social media, we can send emails, and texts.

We can contact someone who would appreciate our reaching out.

We can give, and we can help… we can lift our own spirits – and the spirits of others.

We can forgive, we can give a kind word, a sincere compliment, and tangible gifts of money, food and supplies.

We can appreciate those who give so much more!

And no matter what you believe – we believe in you!

In case you need the gift of song and laughter, here’s my song: 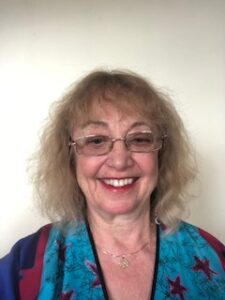 Dr. Sue sings her original song “We’re In This Together”

I created my song “We’re In This Together”

to share my belief that we are all part of one human family.

that you are not alone, and that we all matter.

and act with caring and community responsibility,

we shall overcome the COVID-19 – Coronavirus – pandemic – and future challenges (which will surely come).

We all need to stand together as one human family.

Songs can reach our minds, touch our hearts, and uplift our spirits.

I hope you enjoy my original song “We’re In This Together”  copyright April 2, 2020 Susan Horowitz (Words and Music)

Dr. Sue Sings “We’re In This Together” 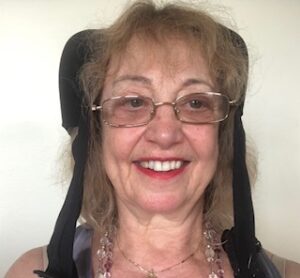 “Masks probably do provide some protection.” That’s the latest news from The New York Times

NYTimes on Masks and Coronavirus:

“Masks probably do provide some protection. They’re particularly effective at keeping somebody who already has the virus from spreading it to others, and they may also make the mask’s wearer less likely to get sick.

“Coronavirus appears to mostly spread when germ-containing droplets make it into a person’s mouth, nose, or eyes,” Vox’s German Lopez explains. “If you have a physical barrier in front of your mouth and nose, that’s simply less likely to happen.”

Of course we should give first priority for masks to health-care workers. And there may be no masks available.

What can you do?  You can Make Your Own Mask!

It may not be medical grade – but it is surely better than nothing! Tie a Scarf around your Nose and Mouth! (You’ll feel like a Movie Star – The Lone Ranger! ) Or Use a Bra Cup – any size will do! Fasten with hooks and eyes, snaps or elastic – get creative. Or cut up an old shirt or pants leg! (Use your imagination, your scarf, shirt, pants…or bra!)

You don’t have to live in New York to be NewYorkStrong ! 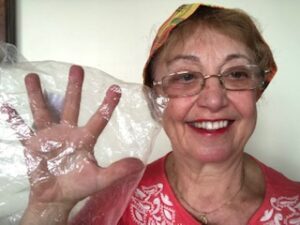 Dr Sue shares Health Tips to Cope with Coronavirus No gloves? No problem!  Health Tip #1: Wear plastic bags! We all know it’s best to wear plastic gloves when we touch public surfaces. But what do you do when the stores don’t have them? Besides, gloves and masks (which are in short supply) should be reserved for health care providers and people on the front lines. What can you do? Get resourceful! Most of us have plastic bags lying around the house. Slip on the gloves when you go outside – before you touch buttons, door knobs, railings, revolving doors, money, etc. Are plastic bags as effective as surgical gloves? Do they replace social distance? Of course not. But they are certainly better than nothing. When you come home, take off your gloves and… Wash Your Hands! Health Tip #2: Don’t touch your face! Coronavirus (COVID-19) gets in through the mucous membranes. These are mainly located in the eyes, nose, and mouth – near your face. Touching your face is often an unconscious habit, so I put on a scrunchy, and tucked my hair under my cap. The cap reminds me: Don’t Touch Your Face. Health Tip #3: Self-Isolate and Social Distance I stay home most of the time and social distance when I go out. We all need to do this – for ourselves and our community. Stay Healthy – Stay NewYorkStrong !   Dr. Sue Shares Health Tip: Plastic Bags