“Hamilton the Musical” is a lot of laughs…after the show! I streamed the mega-hit, mega-bucks Broadway show on my computer. Due to the pandemic, Broadway is closed for live entertainment, but “Hamilton” now streams online – if you subscribe to Disney +.

I am in voluntary self-quarantine, so I spend most of my time at home with my computer – or going for morning, solo walks in my New York City park – where I became friendly with the Brookfield Place Security Guard. I always wear a mask indoors, but when I’m outdoors for my early morning, uncrowded walks, I’m less cautious. The Guard is more available before the daytime crowd arrives. We stay six apart and enjoy lively conversations, updating each other on our lives – with encouragement and humor.

The morning after I watched “Hamilton” I encountered my new friend, the Guard. He had not seen the show on Broadway or online, so I summarized the story – with my own comic twist – and here it is!

Hamilton (a US Founding Father), a.k.a. “Mr. Ham” is the lead role. Mr. Ham, immigrates to the pre-USA, fights for independence, invents banking, flirts with his bride’s sister, insults people, and fathers a son – who gets into to a duel to defend his dad’s honor. Mr. Ham tells his son to shoot into the air – which gets him killed.

Mrs. Hamilton is really steamed – especially when Mr. Ham defends his financial honor to his enemies by pointing out that his suspicious check stubs were payments to the hubby of a local hottie for letting Ham and hottie do the nasty in the wife’s bed.

Mr. Ham gets into his own duel, shoots into the air, and gets himself killed.

The musical makes multi-millions – on stage and now…on screen.

The Security Guard and I plan to write a sequel called… “Mrs. Hamilton: I Married a Moron! “

In our version, Mrs. Ham gets the pistol and shoots Mr. Ham in his pee-pee.

She becomes a Founding Mother, and we become billionaires!

Our new, improved version has comedy and a happy ending! We expect it to be a success – on stage, screen and as a sitcom/reality show called… “I Married a Moron!” The married couple will be play by a celebrity wife and a famous US politico husband. Guess who!

We hope to spin-off the sitcom into dance-exercise videos – so you can social distance – and stay in shape! Here is a free sample!

Dr. Sue and Security Guard Dance-Exercise in the Park! 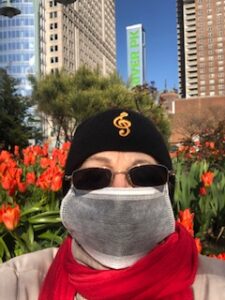 Here are Health Tips to Prevent Infection! Don’t touch your face! COVID-19, like most coronaviruses and the flu, enter the body through the mucous membranes in the eyes, nose, and mouth – all of them on the face. I realized that one of the main reasons that I touch my face is to brush away my loose hair that falls on my face. So I fastened my hair with a scrunchy and tucked it under my cap. Wearing the cap also reminds me – don’t touch my face! I’m on my solo walk in the park. I’m keeping social distance – with fresh air, sunshine, flowers,… and a curious squirrel who ran up to my feet. But I walked away. Better rude than sorry 🙂 Touching your face is an unconscious habit, and it’s easy to slip – so wash or sanitize your hands as soon as you get home – do it regularly. Cover your nose and mouth. Health Care Workers need medical-grade masks but a scarf or home-made mask offers some protection Avoid touching paper and public surfaces – that includes cash, receipts, doorknobs, railings, etc. Hydration, multivitamins and particularly zinc are helpful for body’s defense against all viruses. Use as directed. Excess of  any vitamins and minerals not recommended and could actually lower your immune response. Do not take Ibuprofen or Advil – unless truly necessary. According to some sources, these drugs make the virus much worse – with patients winding up on ventilators. This warning about Ibuprofen and Advil is disputed, but we say, why take the risk? Be mindful of early symptoms of COVID-19, which include: If symptoms progress to frequent coughing or Shortness of Breath, seek medical care immediately. Early diagnosis and treatment is essential to keep the morbidity and mortality low. Health Advice comes from Medical Doctors with Experience in Infectious Respiratory Disease.  Here’s my Video with Health Tips!