My Zoom Opinion: To Say or Not? Dr. Sue Positive Entertainment: (How I Got Kicked Out of Zoom Class)

This Blog Post needs my short personal bio, so here goes. I’ve been an English/Theater Professor/Writer for over thirty years. (I stopped teaching about the time the pandemic hit in early 2020.) I have close relationships with some of my former students and a connection with my former college. I also have opinions.

Anyone who wants to keep a job (as I certainly did) knows that you sometimes
swim in shark-infested waters. You learn to keep some of your opinions to yourself – especially in group meetings. This is especially true if you don’t have job security (which in academia means tenure).

But if you never say what you truly feel, your calculated, tactful silence tends
to chip away at your self-esteem. Over time, those little bits of your true self get lost. Instead of the smart, vibrant, outspoken, fully alive person you used to be, you wind up as a weak, sad, timid ghost.

As any English/Theater Teacher, Actor, Theater Pro, or Amateur Nerd knows, the subject of ghosts brings us to… William Shakespeare! My main go-to ghost is Hamlet’s dead dad – Hamlet Senior, who gets the action (and non-action) into high gear.

Prince Hamlet, the hero of Shakespeare’s famous tragedy, has a spooky, but motivational conversation with King Hamlet (the ghost). Ghost Hamlet tells Live Hamlet that his Uncle Claudius, the dead king’s brother, murdered him, married his widow (Queen Gertrude –Hamlet’s mom), and is now King of Denmark. Ghost Hamlet tells Hamlet to seek Revenge!  Our hero Hamlet immediately… thinks about it!

What does this have to do with my getting kicked out of Zoom Class?

Like me, Hamlet talks to people (ghosts) who aren’t physically there. In my case, it’s Zoom Chats (the sidebars on Zoom classes and meetings where you type your thoughts to people who are somewhere in cyberspace. After Zoom, they vanish, like ghosts).

In Shakespeare’s play, old King Hamlet’s Ghost issues a call to action: kill your uncle!  Hamlet decides that  Ghost is right, and he should kill King Claudius – but on the other hand…. What if the ghost is wrong – or a fake ghost ? Instead of springing into action, Hamlet springs into depression. People think he’s mad (and maybe he is – or not). After several murders and suicides (Hamlet’s girlfriend, her father, her brother, Hamlet’s friends, his mother, Claudius, and, finally, Hamlet himself), the stage is littered with bodies, and the show is over.  Denmark has a new King, and I’m ready for a coffee break (preferably with a Danish pastry because Shakespearean tragedy gives me an appetite).

How did a Shakespeare semi-scholar (me) get kicked out of Zoom class?

My Zoom class was not actually about Shakespeare, it was a series about musical theater, which tends to be less tragic (except for investors when the show closes on opening night).  Our Teacher showed video clips from Broadway shows, led discussions in the Chat feature (where we post comments), and called himself an “Expert”. I didn’t bother looking up his academic credentials or affiliation, because I didn’t care. I already have a Ph.D. in Theater, so I don’t need academic credit. I was interested in the subject matter and what seemed to be an entertaining, informative experience. As long as I was enjoying the class, I didn’t need to know his professional history. I paid for an “All-Access Pass” which gave me full admission to his series of Zoom classes and videos. (Scroll down for my own Video –  wearing my Shakespeare Hat and talking to Teddly Bear Puppet).

So there we were, several classes into the series, watching video clips and posting comments in the Chat.  Most of the comments were posted to “Everyone” – which means everyone can read them.  The other option is “Private” – which means only you and your chosen Zoom attendee reads your post. The “Expert” controlled the Chat. I usually posted supportive comments, but if I disagreed, I said so briefly without negative personal remarks.

I never posted political comments until… Cabaret.  The musical Cabaret is set in Germany during Hitler’s rise to power. The in-cabaret performances echo the real-world events happening off-stage – including the growing threat of the anti-Semitic, violent Nazi regime.  During the class, the teacher said that the Nazi idea of the German “folk” (ancient Germanic tribes) excluded all non-Aryans (like Jews). 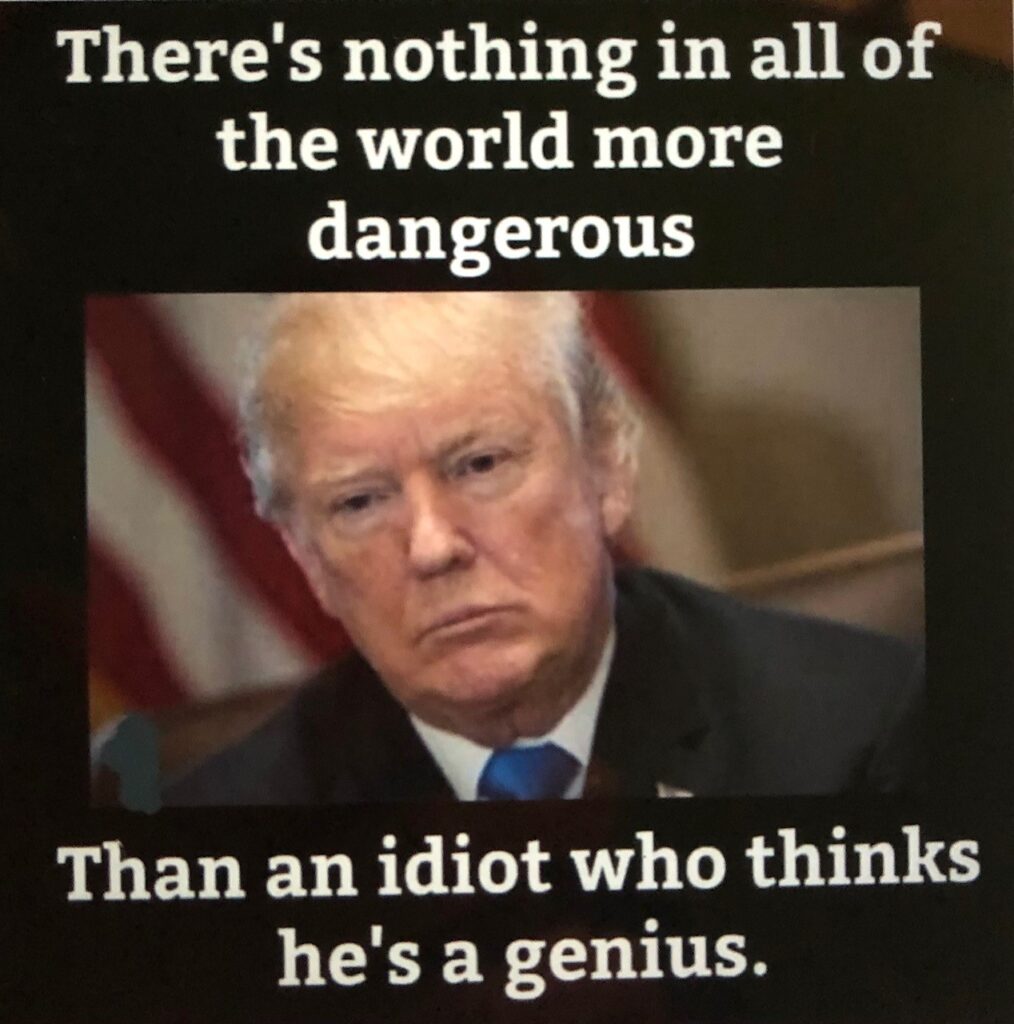 I thought there was a parallel between the myth of the German “folk” and the Trumpian idea of the United States as an Anglo-Saxon country. (The Anglo-Saxons were Germanic tribes.)

I started posting a brief comment in the Chat about “Trump notion of the USA as an Anglo…” Then I accidentally pushed “Enter” which posted my half-sentence.

Before I could continue, the Teacher cut me off, and announced to “Everyone” in the Chat that if I posted political comments, I would be thrown out of class!

At first I thought: is this a mistake? He can’t mean me! Throw me out of class for one, brief remark?  In my long career as an educator, students have said and done much more shocking things! I don’t throw them out of class. I usually ask to speak with them privately so we can solve the problem without a public confrontation.  When this Zoom teacher threatened me and posted it to “Everyone” in the Chat, I felt embarrassed and attacked.  I did not want to escalate the situation, so I didn’t post anything in reply.   After a while, the class was over, with the Teacher soliciting and getting compliments about his class from some of my fellow students.

After class, I felt conflicted. Saying nothing would avoid immediate conflict. But keeping silent made me feel powerless and depressed.  Why should this Zoom “expert” feel enttitled to embarrass me in front to the class – and for what – one half-sentence of a political opinion that he did not want to hear?

I decided to write an E-Mail to the Teacher and CC my E-mail it to his “Staff “– which probably meant his Assistant. Based on his class behavior, I figured that he might distort what actually happened.  If I CC’d his Assistant, who seemed reasonable, she would have my written record. I also figured that since the Assistant was an African-American woman, she was more likely to understand my feelings than the White, male teacher.  Here is my E-mail to the Teacher – CC’d to the Assistant.

You’re invited to Sing Along to “Rudy the Red-Nosed Lawyer” – a funny parody for the 2020 holiday – and political season! The tune (and part of the title) are based on a favorite holiday song: “Rudolph the Red-Nosed Reindeer” by songwriter Johnny Marks based on a 1939 story by Robert L. May.

Here’s my Song-Video – Scroll down for Lyrics!

Here in solo quarantine due to Covid-19, life can be lonely and boring. Let’s face it, human beings need to share food, drinks…and show tunes!

All the theaters and cabaret venues in New York City are closed. There’s no stage, no scenery, no colored lights, no live audience – and worst of all – no cute waiters.

What’s a cabaret girl (or boy) to do? We still want to connect – and we need to stay creative. We need life purpose, we need human company, we need the arts, we need… “Orange Bunker-Boy Comedy Cabaret”!

Some of us live-stream; some of us zoom; some of us youtube, and some of us social media. Some online friends become ongoing friends – who comfort and cheer us through these dark days and nights – minus the bright light lights of Broadway and mini-lights of cabaret. This show is for you.

I call it my Home-Style Comedy Cabaret. It’s not as filling as home-fries, but on the bright side – I won’t have to burn calories at my gym – which is still closed 🙂

By the way, this show is called “Orange Bunker-Boy Comedy Cabaret” – so if you don’t like political comedy – or orange feather boas – and you do like the orange-themed POTUS – don’t watch my video!

But if you do, here we go-a with my boa!

What good is siting alone in your bunk?
Come to where rainbows play
With orange hair you’ll be quite a hunk
Come to Orange Bunker-Boy Comedy Cabaret!

My song is based on real (not fake) news about President Trump giving an in-person commencement speech at West Point Academy.

The young cadets have been away since early March.
But now, they have to travel back and forth to West Point
– fifty miles from New York City – the epicenter of a pandemic!

Dr. Sue imagines herself as a young cadet who’s getting nervous… 🙂