Turn a wedding cake upside down, twirl it like a dreidel, and what have you got?  A modern, musical spin on a free-wheeling wedding farce! This vastly entertaining show has plot twists galore, plenty of doors, discoveries, lover-ies and a superb cast (headed by Tyne Daly), director (David Hyde Pierce), and creative team Barbara Anselmi (Music/Concept), Brian Hargrove (Book/Lyrics). Show Folk: Harriet Harris, Lisa Howard, Sierra Boggess, David Burtka, Montego Glover, Chip Zien, Josh Grisetti, Edward Hibbert, Adam Heller, Michael X. Martin, Anne L. Nathan, Nick Spangler. Hope you enjoy hearing me sing my original song: “You Can Be a Hero” copyright 2015 Susan Horowitz Creative Living by Dr. Sue: Ride’em Cowboy (and Girl) & Support the Arts! Ride’em Cowboy (and Girl)!: Comedy and couple-dom are full of unexpected twists.  We get a choice – resist and stick with the “shoulda” or go with the ride. Which do you think leads to more happiness? Support the Arts!: Without the arts, many children have no chance for a better, more fulfilling life! Without the arts, there is no real beauty, joy,  or civilization! 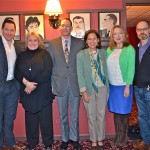 The 2013 Drama Desk Luncheon at Sardi’s served up convivial buffet of seasoned Broadway actors. Moderated by Ronald Rand Founder/Publisher of The Soul of the American Actor, the panel included David Hyde Pierce (Frasier’s brother psychiatrist) and Kristine Nielsen (Vanya and Sonia and Masha and Spike), Olivier Award Winner Bertie Carvel (Matilda), and Jane Houdyshell (Dead Accounts Wicked, Follies).  Topics included: Acting vs. Life: Carvel asserted, “Acting is artifice –not life. Your job is to make it as lifelike as possible.”  Nielsen quoted Stella Adler, the famed acting teacher, “Your imagination is more interesting than your life.” Comedic Acting: Pierce advises, “Tell story and be funny, humor is in writing. Comedy is musical and rhythmic. Really good actors have some kind of music in them.” Acting in Farce, Fantasy and Musicals: Houdyshell, who performed in the fantasy musical Wicked, said,  “Wicked is a fantastical story, broader than life.  For and actor pretending comes from believing. When you wear a 35 pound costume and enormous wig, you know you must become something else!” Directing:  Houdyshell stated, “I respond most creatively to directors who create a safe environment in rehearsal and don’t judge. I prefer collaborative directors who are interested in what actors bring to the table.”  Pierce added, “I recently started directing, which is natural for me. I’m always conscious of the arc of the whole story, not my character’s story.” Audiences: Houdyshell commented, “Audiences sometimes don’t realize that the actors on-stage can hear them. I was once on stage pretending to be asleep, and these two ladies in the front row started arguing about whether I was a dummy.  The first one said, “I just saw her breathe.” The second one answered, “She’s a dummy – just look at her legs!” Reviews: Pierce recalled the opening night of a play in which he played a lead role. After the show, he was sitting with his parents in a restaurant, and the reviews came out. The New York Times critic Frank Rich was very negative. The after-show party was cancelled and soon after that the production closed. Pierce said, “I just sat on that stage and cried – but I love this fantastic business!” Houdyshell nooded in rueful understanding.  “One reviewer said my accent was a thick as my ankles.  See, it always goes back to the legs.” Nielsen commented, “Reviews are a necessary evil. I don’t read them, but my friend does and gives me general tenor.” In contrast, Carvel, who reads all reviews said, “There are as many opinions as there are reviewers, and now with blogs, it’s infinite.  I forget the bad reviews.” Happiness/Success Habits: Take Reviews and Opinions with a Grain of Salt – take what’s helpful and ignore what’s useless or mean-spirited.  Most spiteful remarks come from ignorance, envy, or constipation (of the body or spirit.) This is easier said than done. As the great actress Ethel Barrymore quipped, “For an actress to be a success she must have the face of Venus, the brains of Minerva, the grace of Terpsichore, the memory of Macaulay, the figure of Juno, and the hide of a rhinoceros.”   (Photography: Harry Kierman, Barry Gordin, Editor: Jay Berman)