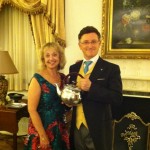 SC:  When I do the “Think a Drink” trick, that’s the part of the show where I most feel like Harry Potter because I never know what drinks people are going to be calling out, and it’s fun to see the combination in any order. People choose hot drinks and cold drinks.  One of my favorites was when someone asked for a frozen margarita, so I poured out a frozen margarita – it came slushing out of the pot, and then right after that, the second person said, “I want a hot chocolate with mini marshmallows.” I picked up the pot with steam, poured the hot chocolate, and the mini marshmallows went blunk, blunk, blunk into the cup.  The guy who was drinking said, “I can’t believe this!” Sue:  If you were not a magician, what would you be? SC: I’d probably be a physicist. A magician is aware of the natural laws and tries to use theatrics to make it appear as if the natural laws are being broken.  However, if you are a scientist, you’re not trying to break the natural laws; you’re just trying to observe them. I’ve always been interested in what is and isn’t impossible. If you’re a scientist, you’re trying to find not only what’s possible, but the basis for how it’s executed.  There’s a lot of overlap between how a magician thinks and how a scientist thinks. I’m trying to entertain an audience with showing them impossible things.  A scientist is trying to take those impossible things and make them apparent. Sue: A scientist is trying to take impossible things…? SC: Things that we don’t understand like quantum mechanics or satellites in outer space.  Before we knew what they were, it was magic.  Arthur C. Clarke said, “Any technology which is sufficiently advanced is indistinguishable from magic.”  I’m interested in still keeping that mystery alive. Sue:  Is there anything I haven’t covered that you would like to talk about? SC: What’s special about my show is that it’s completely interactive. I can’t do this show solo.  I can’t go into a rehearsal space alone to practice this show. Sue: Why the dress code? SC: The Waldorf Astoria has a tradition. There’s a dress code even in the lobby.  If I’m dressed in tails, and everyone else is dressed casually, there’s a disconnect.  But when people get dressed up at home, and they’re thinking “I have to go to the magic show tonight, the show has already started for them when they’re still in their bedroom. By the time they get here, they’re already committed by what they’re wearing.  Then they look around the room and see everyone else did the same, and it’s kind of special.  People used to go to Broadway theatres dressed in their best clothing, but nowadays people go dressed super-casual, and nobody seems to care.  I’d like to bring back that age of dressing up to go to the theatre, and people seem to like To learn more about Steve Cohen’s Chamber Magic Show visit: chambermagic.com   See you at the Waldorf!